On 23 June, the government announced the gradual dismantling of travel restrictions. Starting 13 July, travel restrictions can be waived between Finland and countries whose COVID-19 disease incidence is at most 8 new infection cases per 100 000 persons during the previous 14 days.
According to the government, based on the current situation, the restrictions can be lifted as far as the following Schengen countries are concerned: Germany, Italy, Austria, Greece, Switzerland, Slovenia, Hungary and Liechtenstein. The government is set to make an assessment concerning the overall situation of the Schengen and EU countries by 10 July.
At this time, the crossing of the border is possible under certain conditions, which you can read about on the website of the Finnish Border Guard.
International air travel to all Finnish airports has already been allowed since 15 June.

Lappeenranta Airport has closely monitored the development of the corona situation in cooperation with several authorities and has followed all international and national guidelines on their part.
According to airport CEO Eija Joro, the authorities have specified comprehensive instructions for airport operations regarding the dismantling of travel restrictions and the commencing of air travel, which will also be followed in Lappeenranta when flights are getting started again.
- Now that the government has announced the dismantling of travel restrictions, planning regarding future air traffic is moving forward and air travel is gradually returning to Lappeenranta.
- According to the plans of airline companies, the first flights from Bergamo will commence in July. Bergamo also provides access to several other destinations in Europe and at the same time several dozen European cities are well connected via Bergamo to the Saimaa region here.
Other routes from Berlin, Vienna and Budapest will commence at the end of October. Flights are available on the Ryanair homepage.
The movement of passengers and the compliance of safety distances at Lappeenranta airport is conducted by means of special arrangements based on the number of passengers.
- In addition, the use of various protective devices is increased and hygiene and cleaning is further enhanced. We also ask travellers to be prepared to use their own masks on the airport premises as well as on the flight. Ryanair requires the use of face masks during their flights. Masks and hand sanitiser are sold at the airport.
In spring, the airport already closely cooperated with several authorities to make safe travels possible. According to Tuula Karhula, Director of the Health and Elderly Services at the South Karelia Social and Health Care District (Eksote), there is no knowledge of any person arriving via local air travel before the implementation of the traffic restrictions that would have had a coronavirus infection.
In view of the current situation, the airport has continued its cooperation with the public authorities and prepared new guidelines in cooperation with Eksote and other authorities.
- Here at the airport we believe that thanks to the operational guidelines and the measures in place at the airport and during the flight, the possible corona risks related to air travel are staying under control. We are actively monitoring the situation and the assessments and guidelines by the authorities. If necessary, we will make changes to the airport operations, says Eija Joro.

The number of passengers at Lappeenranta Airport was rapidly growing before the stop caused by the coronavirus situation. According Markus Lankinen, CEO of the Saimaa Airport Foundation, the corona virus and its related restrictions caused a significant blow to the travel and service industry.
- According to estimates made by the authorities, the overall situation is getting better and international travel can thus be launched by safely following the operational guidelines. Hopefully, Finland can soon evaluate the safe dismantling of travel restrictions regarding passengers arriving in Finland.
- In addition, the opening of air travel can bring very necessary revenue opportunities to the travel entrepreneurs in the Saimaa region, especially since the Russian border is estimated to stay closed.
Lankinen believes that compared to previous years, a higher number of Italian travellers can safely arrive in Finland to spend their vacation at the Saimaa lakeside when the restrictions in Finland are dismantled.
- Italian residents made up the biggest group of customers from a country of destination using Lappeenranta airport. According to a survey conducted by TAK Ltd, 10 % of the Bergamo flights customers at the airport were from Italy. During August 2019, the actual holiday season in Italy, the share of Italian travellers was significantly higher. 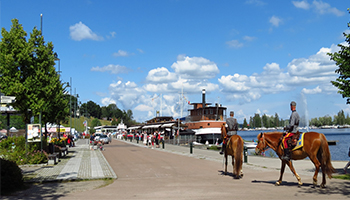 Land in Lappeenranta, visit and fall in love with the our lakeside nature and charming local culture. Let us help you to find the best tips at the Tourist Info.

The secret to a good journey is easy travelling. Lappeenranta Airport is south-eastern Finland's fastest and easiest gateway to European holiday and business destinations. We'll take you there without the queues.